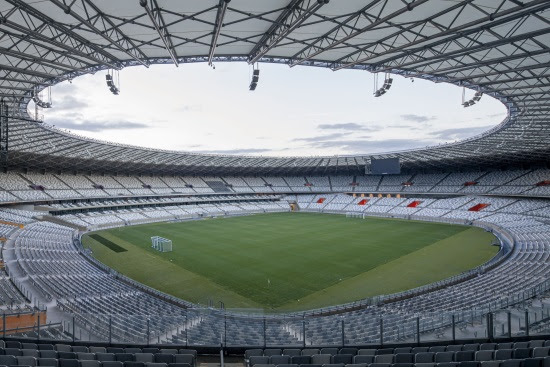 In 2014 Brazil hosts the FIFA World Cup for the second time, now with technology playing a major part in ensuring the enjoyment and safety of visitors. Estádio Mineirão was the first of three 2014 World Cup stadia to be
completed using Community loudspeaker systems. Soundvision Engineering, the largest professional audio and video contract integrator in Brazil, was commissioned to design and install the audio systems by Emílio Miranda of
Johnson Controls Brazil, the contract holder for Estádio Mineirão. Soundvision’s CEO, Antonio Tadeu Torquato, and New Business Manager, Leandro Freire, carried out an extensive evaluation of loudspeaker systems that would provide the best solution for the arena.

These are fed from processors and amplifiers located in five technical rooms, communicating through CobraNet with D-link redundancy and BSS-BLU processors. The system is connected to the arena’s fire alarm system, enabling the distribution of live and pre-recorded messages for mass notification or emergency evacuation.Soundvision was also chosen for two further World Cup stadia, Arena de Sao Paulo and Arena Amazonia, which were also fitted with Community R-Series loudspeaker systems.Arena de Sao Paulo is located in Carmosina, Sao Paulo, and has been built specifically for the 2014 World Cup with a seating capacity of 65,000 for the event. For Arena de Sao Paulo, Soundvision designed and installed a system using sixteen Community R2-94’s, sixteen R2-694’s and sixteen R2-77 loudspeakers.

Arena Amazonia, is located in the city of Manaus in the heart of the Amazon rainforest. This sustainable stadium project will deliver an important legacy for the region and provides seating for 42,377 spectators. This system in Arena Amazonia was completed by Soundvision using sixty-four Community R2-474’s and seventy-six R.25-94T loudspeakers.

This website uses cookies to improve your experience while you navigate through the website. Out of these, the cookies that are categorized as necessary are stored on your browser as they are essential for the working of basic functionalities of the website. We also use third-party cookies that help us analyze and understand how you use this website. These cookies will be stored in your browser only with your consent. You also have the option to opt-out of these cookies. But opting out of some of these cookies may affect your browsing experience.
Necessary Always Enabled
Necessary cookies are absolutely essential for the website to function properly. These cookies ensure basic functionalities and security features of the website, anonymously.
Functional
Functional cookies help to perform certain functionalities like sharing the content of the website on social media platforms, collect feedbacks, and other third-party features.
Performance
Performance cookies are used to understand and analyze the key performance indexes of the website which helps in delivering a better user experience for the visitors.
Analytics
Analytical cookies are used to understand how visitors interact with the website. These cookies help provide information on metrics the number of visitors, bounce rate, traffic source, etc.
Advertisement
Advertisement cookies are used to provide visitors with relevant ads and marketing campaigns. These cookies track visitors across websites and collect information to provide customized ads.
Others
Other uncategorized cookies are those that are being analyzed and have not been classified into a category as yet.
SAVE & ACCEPT